A brief review of the November 2012 Bristol Branch lecture

"Richard Lugg provided, perhaps, the quote of the evening, stating that the enthusiasm and response to the evening’s presentation had overshadowed the one he had received at the Dubaii Air Show"


In front of a packed audience at the Bristol Branch of the RAeS, including engineers who had worked on Concorde, HyperMach Aerospace CEO Richard Lugg gave an entertaining lecture about the proposed SonicStar supersonic transport that promises to fill the gap left behind by Concorde, with Mach 4 cruise, London to Australia in 3 ½ hours, no sonic boom and also little environmental impact. Such exciting claims will require dramatic technological advances, and there was no shortage of both innovation and novel technologies throughout Richard’s presentation.

The engineers in the audience were kept enthralled with a wide range of futuristic capabilities that will be required: Hybrid Propulsion Systems, Plasma Flow Control, Magnetic Levitating engines with no drive shaft, superconductivity, to name a few. Despite a large number of probing questions from the knowledgeable audience, a lot of the details remain a mystery, hopefully to be revealed at a later date.

In her introduction to the evening, President-Elect Jenny Body mentioned that one of the great strengths of the RAeS was the lecture programmes given at the local branches across the UK, and that tonight’s talk was a good example. Richard Lugg provided, perhaps, the quote of the evening, stating that the enthusiasm and response to the evening’s presentation had overshadowed the one he had received at the Dubaii Air Show. Attendees to this exciting and futuristic lecture are going to follow the progress of the SonicStar project with great interest, particularly as it is likely that some of the development may be undertaken in the UK. 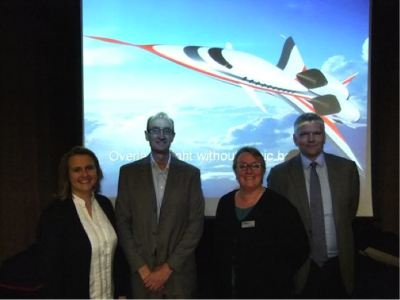 Posted by info@raesbristol.org.uk at 7:53 pm